How Apple Teaches The Importance of Silence 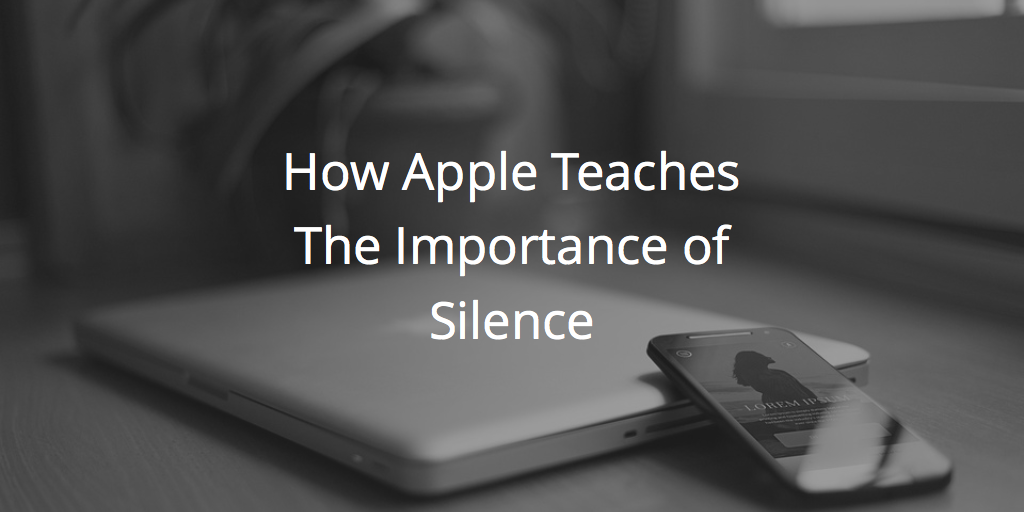 The presidential election is coming to a close. Finally.

We’ve been in a particular negative election season. Most trending stories on the news broadcasts and social media focus on it, and most of the conversation, particularly online, is angry and divisive.

Politics in this country is an incredibly sophisticated machine, and this year is no exception. Campaigns work hard to produce a polished message, from slogans to signage to policy statements.

Candidates often hire political consultants, experts in the field of political campaigns. These individuals are responsible for maximizing the visibility and likeability of the candidate while highlighting the weaknesses of the opponent.

I think both presidential candidates should fire their political consultants and look to Apple. Why? Because I think Apple just taught our country something incredibly important about beating the competition.

This has nothing to do with innovation, design, or events. It doesn’t involve hardware, software, or potentially new product lines. Instead, I’m talking about the one thing Apple has done so well lately:

Silent about the competition

Aside from political news, one story you’ve seen recently focuses on some Samsung phones exploding. The Galaxy Note 7 model to be specific. Back in September of this year, roughly 100 users in the US reported that their device exploded. The more technical explanation is a battery failure and resulting fire.

Samsung took this issue seriously and issued a massive recall of the device. Hundreds of thousands of users swapped their old phones for newer “safe” models. Samsung believed the issue finally fixed.

That is, of course, until some replacements began having issues. After the recall was issued, the FAA advised passengers to not bring them on flights. Since the replacements have issues, it is now illegal to bring the device on a plane.

Where Apple puts its focus

Apple and Samsung are two of the biggest names in the smartphone market, and they have a long list of court battles between them. They literally have fought in courts all over the world. They also have exchanged jabs at each other in their advertising and at keynote events.

With Apple and Samsung proving to be such public foes, you may assume Apple would like the opportunity to strike a public blow to their biggest rival. Especially since this fiasco will cost Samsung a reported $5 billion. And many of the former Galaxy Note 7 users are expected to switch to the iPhone.

All of these things should point to Apple making a statement about it, either in the September iPhone event or their upcoming Mac event. Yet Apple has chosen to remain silent.

Why not use the opportunity to kick the opponent when they are down? Isn’t this a great chance to further establish dominance in the smartphone market?

That’s simply not how Apple does business.

Sure, they’ve done things and made comments about rivals in the past. Yes, they’ve added hardware or software features in reaction to what others are doing. Yet the typical Apple style is to focus solely on their own products. They realize it’s actually better to make your product insanely good because that’s the best way to beat the competition. You don’t win by focusing all of the attention on the inadequacies of your opponent. You win by focusing your energy on making sure your work is the absolutely best.

What leaders can learn

Confident leaders know it’s more important to focus on your own work than the failures of your opponent. Why? Because we all have a limited capacity to think, and if my capacity is focused more on my opponent than my work, then I won’t produce great work.

The best way for me to win is to create something greater than the other person. Sports teams don’t win championships by focusing on how bad the losing team played. They win because they focus on playing better.

As you lead and influence people, you must decide which path you’ll choose: will you focus solely on being the best, or will you allow yourself to get distracted with the failures and perceived inadequacies of others?

The answer should be clear: focus solely on being the best. Putting any attention on your opponent distracts people from what you do.