What You Can Learn From the Latest Changes to Facebook Ads 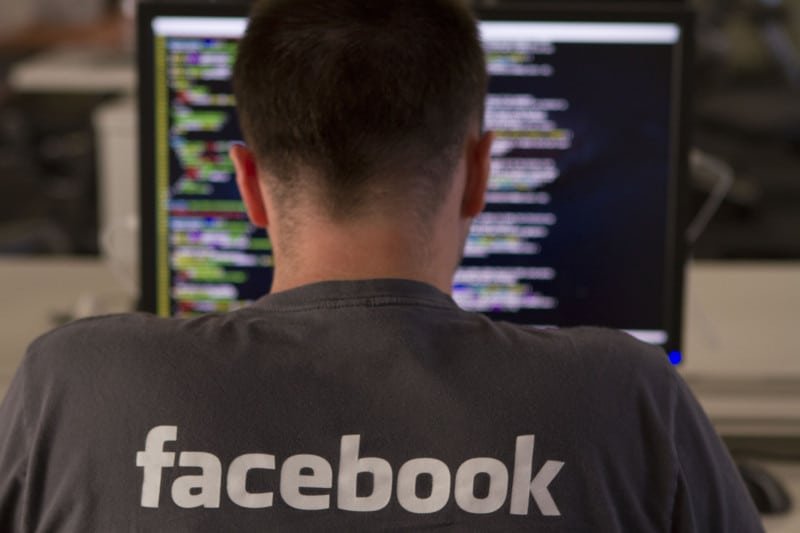 Paid advertising, specifically Facebook Ads, can be a powerful way to grow your business. Countless experts say the only way to grow is through these paid ad platforms. But this is where the experts are wrong. It isn’t how you grow a business in the modern landscape, and Facebook’s update last week reinforced that point.

How Facebook ads are changing (or ruining) your business

Late last week Facebook announced a massive update: you can now see every ad being run by that business. In just a couple clicks, you get a look into how a company runs their Facebook advertising and marketing.

This update is likely in response to the Russian interference in the 2016 election, as well as the Cambridge Analytica scandal. Those events, along with Facebook founder Mark Zuckerberg being grilled in front of Congress about transparency, led to one of Facebook’s most interesting updates in a long time.

Once I saw the news (from Facebook’s Twitter account, ironically), I was instantly addicted. Now I can quickly see all of the Facebook ads run by any company, not just ads targeted at me. As a marketer and copywriter, it’s a fascinating look behind the curtain of companies and thought leaders I respect.

Yet when I saw the news, I couldn’t help but think of one real truth:

This will dramatically impact online marketing. And it will likely reveal a difficult truth for many companies:

Like most things in marketing and business, however, just having Facebook ads doesn’t guarantee success. This is where lots of good people waste their hard-earned money: they pour dollars into an ad budget with little return.

Because they focused too heavily on how. Just having Facebook ads running isn’t enough. Beta testing images and audiences isn’t a guarantee for success. Many invest time and resources into how they communicate and reach people, yet spend little time on what to say.

And as Donald Miller says, “People buy products and services only after they read words that make them want to buy those products or services.”

Now everyone can see how business pages use Facebook ads. And what will happen? It will expose many who focused first on how instead of what. It will reveal which companies are wasting money every day on ads that aren’t working.

And no business owner wants to lose money intentionally, yet so many people do.

Thankfully, you don’t have to be one of those people. You can answer the what question first by doing these three things:

As I said earlier, focus first on your words. Put some time and effort into getting those right, then move on to ad creation.

I’ve followed the work of Michael Hyatt for a long time. His blog, podcast, and resources have been incredibly valuable for my life and work. He’s been open in recent years about how his company grows rapidly, and I think a primary driver of leads for him is Facebook ads.

Let’s take a look at two ads he’s running right now for his Full Focus Planner, and I’ll show you why each one works. 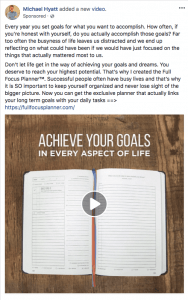 This ad works because it focuses on our aspirations, addressing who we want to become but also empathizing with what keeps us from getting there. So here’s how that ad fits in the three-part framework I listed above. 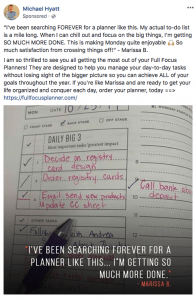 This ad also focuses on the planner, but it takes a different approach: using social proof from a satisfied customer. Instead of sharing what the customer’s problem, Hyatt lets a customer tell us what the problem is. We see ourselves in this quote, and it works. Let’s take a look at it based on the three-part framework:

Yes, when you see the ads run by his Facebook page, the number is overwhelming. But remember: his team is testing different messages for different audiences to see what works. So I scrolled through his current ads to show you some great examples of getting the messaging right first:

Transparency can be a good thing, although sometimes it’s a bit painful. Letting everyone see your Facebook ads may seem a little overwhelming, but it’s a great opportunity to do a reset, to focus first on content then on delivery.

So here’s what I want you to do:

Your business deserves to grow, and that starts with a better message. Now go out there and create it. The world needs to hear it.