Beware of the Idea Grenade 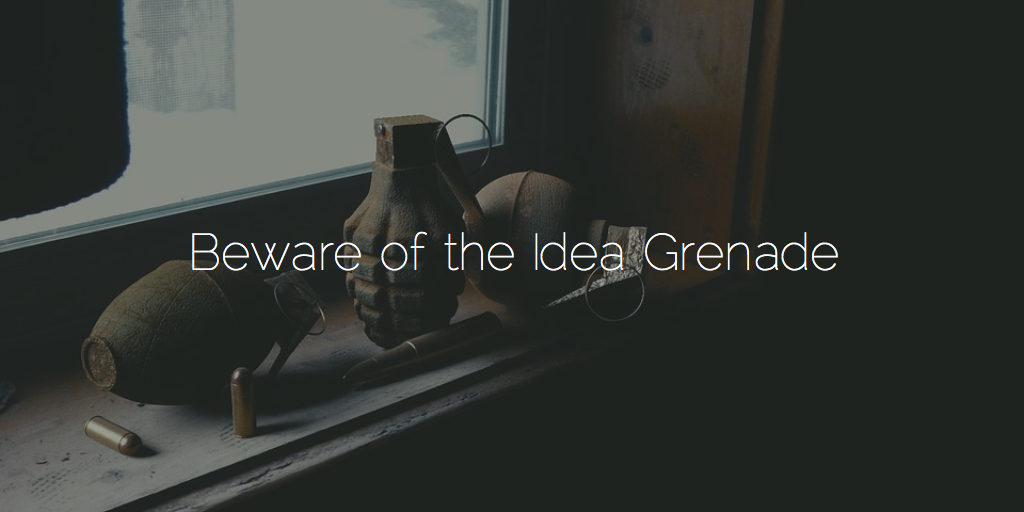 We have all been in that meeting, hallway conversation, or email chain.

You know the one I’m talking about: it’s the one where someone hurls an idea grenade onto a group of unsuspecting victims and carnage ensues.

Maybe you’ve never heard of the idea grenade, but you already have a hunch as to what I mean. The idea grenade is when someone (generally the leader) “tosses out an idea” for the rest of the team. Usually it comes with no warning, no connection to the past, and generates the appearance of a need to quickly change something

These grenades can be incredibly damaging to the morale, focus, and productivity of a team. The carnage from these grenades will far outweigh any potential gain produced by following through with the idea.

People like consistency and stability in their work. Big surprises are rarely, if ever, received well, and they almost never produce the intended results.

Leaders are the worst at hurling these grenades, but anyone can do it. Chances are, regardless of your organizational rank, you too have hurled a few of these grenades at your coworkers.

These ideas cause so much damage because the almost never receive follow up. Over time, people begin to ignore your ideas because they instinctively know that follow-up and execution are more rare than a day without a Kardashian selfie.

In one work setting I realized that I was the main culprit for slinging idea grenades at two people who reported to me. For a while I thought I was helping their creative juices flow and enhancing the work they produced. Instead, I was creating stress and instability.

Once I realized the error of my ways, I apologized for what I had done. No one likes these types of ideas. After I apologized, I made a commitment to only bring a ideas that would have follow up and execution.

And you know what? Our teamwork got much better.

If you are constantly slinging idea grenades at work, stop. Then apologize to your team. They all know you do it. Just admit what everyone else knows. And then do great work.