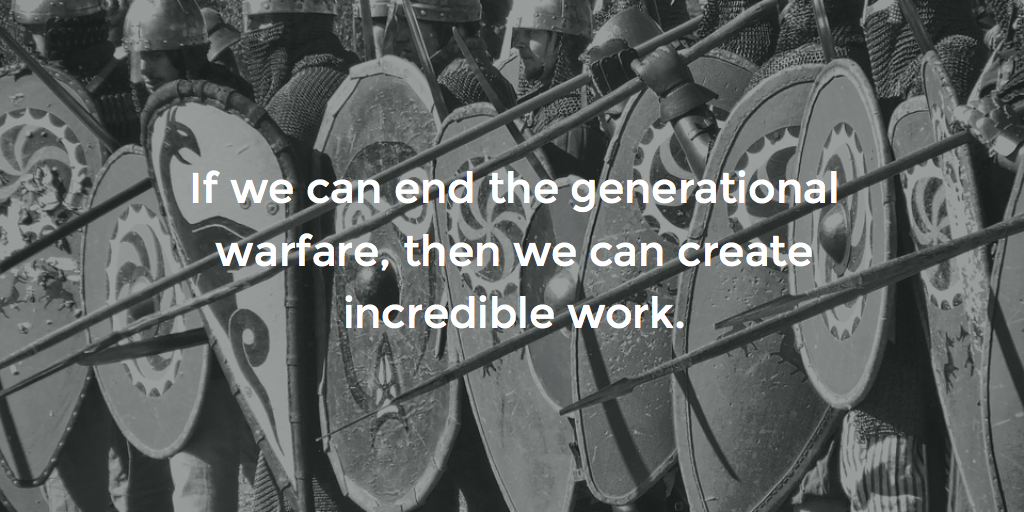 “Millennials are the greatest generation in the history of the world and we are here to fix everyone’s problems!”

“Millennials are just a group of cotton-headed ninny muggins.”

You get the idea.

It happens so much that I have learned to tune it out. That is, of course, until the viral video from Alexis Bloomer blew up my Facebook feed.

Her “apology from millennials” gathered over 40 million views. Honestly, it felt like friendly fire. Sure, I agree with some of her points. They are some of the same things I’ve said to people in the past. But what struck me the most were the comments surrounding the video.

And then it hit me:

Generational warfare is intense. And it has to stop.

Think about it. Now more than ever, we are fully committed to a generational war in our workplaces. Seemingly hundreds of articles are written daily about how millennials are impacting everything from the workplace to the cereal industry.

On the other side, millennials are proactively trying to fight against the stereotypes. We work hard to prove they aren’t entitled. We are frugal in order to pay off high student loan debt. Yet in spite of these great advances made by my generation, we unfortunately are shooting back at other generations.

This issue has shown, once again, that we still do not know how to handle the internet.

That comment seems random, right? Think about it. Have you heard older people talk about the intensely negative conversations, magazine articles, and news stories about their generation when they were in their 20s? Did you read of baby boomers being criticized as loud and as often as the millennials.

Probably not. Why? Because the internet did not yet exist. And neither did 24 hour news channels that needed stories to fill time. Did those feelings occur in conversations at work? Probably. Every generation has some level of uncertainty and fear about the next generation. Maybe it is insecurity, or maybe it is pride. Whatever the cause of the fear, it is not new with the millennials.

Thanks to the internet, the generational warfare is almost unbearably intense. We quickly share articles or videos supporting our opinions of other generations. We comment on what someone else shares. We argue with someone who disagrees with us.

And at the end of the day, we do more harm than good.

So here is what I’m asking you to do: Stop it. Stop perpetuating the generational warfare online and at work. Be a leader who decides to see people as people, not as the generational stereotypes that you choose to see. Get to know someone from a different generation as a unique individual, and learn how to work with them to produce great work.

If we all agree to a cease-fire in the generational war, then maybe, just maybe, we can collectively solve our greatest problems and produce our greatest work.