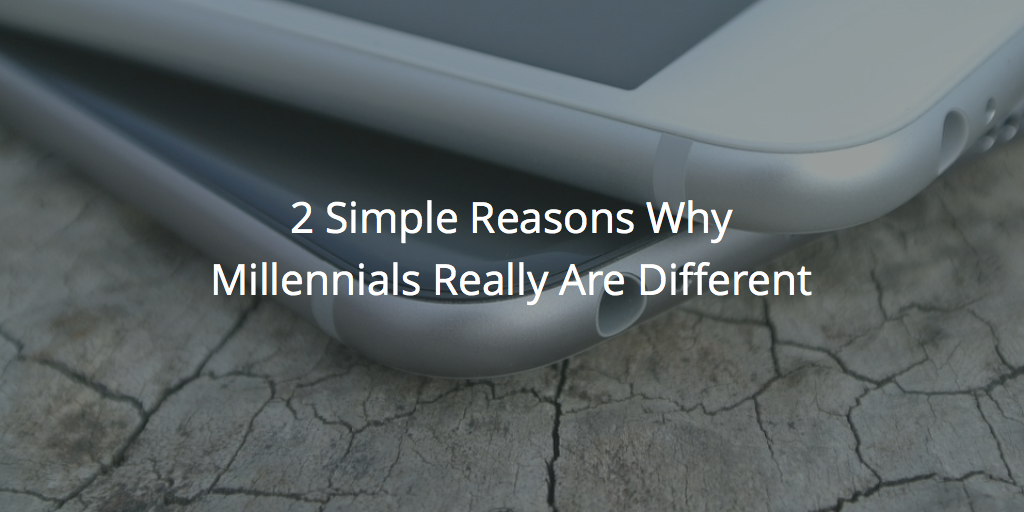 Much of what I write about, both here and on Forbes, focuses on millennials. Whether it’s millennial leadership or millennial workplace issues, I’m passionate about bringing clarity to my generation.

In the midst of all the millennial talk, a clear set of stereotypes emerged. Lazy, entitled, debt-ridden. You name it, we’ve probably been called it.

The reasons why we’re different

Yet despite the similarities across generational lines, there are still unique qualities within each generation. We all want purpose at work, but baby boomers will seek it differently than millennials. What connects the two is the sense of purpose.

If there are things that connect everyone, then what are the general differences? In other words, what makes a generation unique?

History is defined as the things that happened while the generation grew up. What are the big historical moments from the formative years of a generation? Baby Boomers saw the moon landing on TV or feeling the impact of the Cold War. Millennials experienced the “Disney Decade” of animated movies and saw the growth of internet access.

We are all products of the times in which we grew up. The experiences, whether personal or cultural, shape how we think and how we understand the world. These moments are the ones that have a significant influence on our lives.

Remember millennials are those born between about 1980-2000. Think about the national and international events that occurred during those years: the ’96 Atlanta Olympic bombing, AOL, fall of the Soviet Union, the Gulf War, the birth of MTV, the birth of CNN, and much more.

Then think about what happened between 2000-2010, a decade very much integral to the millennial story: 9/11, the iPod, the iPhone, Facebook and the explosion of social networks, smartphones, faster internet, the ’08 recession, and much more.

Why is history important? Millennials, as all generations, are a product of the times in which they grew up. If you want to better understand millennials, start by looking at major events in history.

Think about some of the changes in technology since 1980: the iPhone (and the resulting smartphone explosion), the iPad, better laptops, faster internet in more places, and social media. Even the oldest of millennials vaguely remember a time without everyone having an email address.

Technology is the single biggest influence on millennials. Earlier I said all generations share some commonalities because all people want similar things: purpose, work with passion, etc. Yet I also said how each generation shows those desires in different ways.

Millennials are no exception. Let’s look at the desire for purpose. Previous generations pursued purpose at a slower pace. Why? Because society moved at a slower pace. Technology accelerated the pace of culture, and as a result, it shortens our expectations for achievement.

So if you work with millennials, realize their perceived impatience is likely connected to the pace we live our lives. And if you’re a millennial, realize it’s OK to slow down every now and then.

These two things, History & Technology, are what make each generation different. If you want to truly understand millennials, look at everything through those two lenses. The commonalities and distinctions will quickly become crystal clear.