Millennials are Not Future Leaders 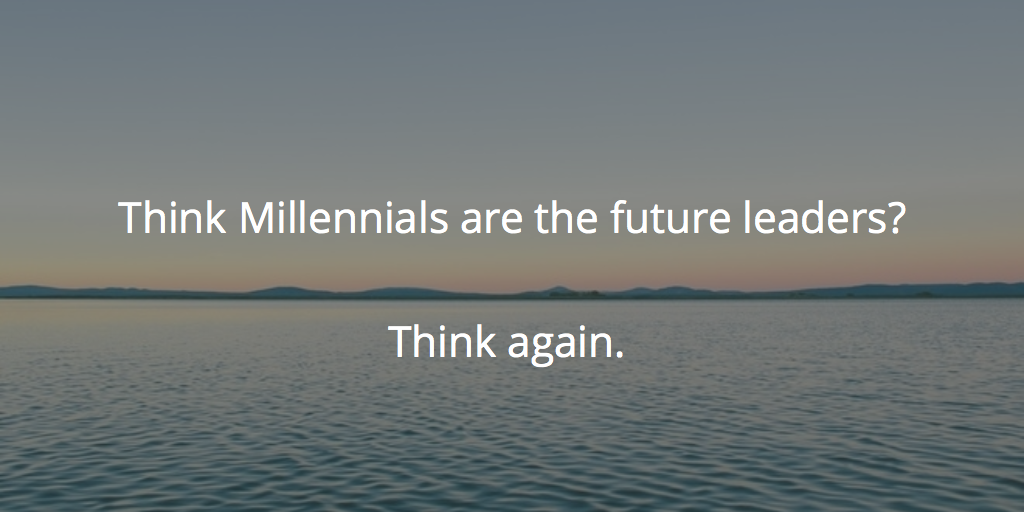 “Our future lies in the next generation.”

“We need to raise up the leaders of tomorrow.”

“The youth of today are the leaders of tomorrow.”

You get the idea.

These statements, and many others, are ones that people over 50 make to sound connected to the “young people.” What they are trying to say is that younger folks are the ones who will eventually lead companies and run nations. (The Brexit vote reminds us that millennials have a long way to go before they are the main influencers.)

I have been inspired many times when I hear people say that I am part of the generation of future leaders. The thought of being able to make a positive difference from a place of great influence is exciting.

But just recently I had this revelation:

Millennials are not the future leaders.

But we cannot say that millennials are the future leaders, because that implies no one else can be a future leader. Think about it. If a leader is defined as “having influence,” then a leader of tomorrow is someone who will have more influence in the future than they have today.

We cannot, then, limit leaders of tommorw to those born between 1980-2000. People are living longer and retiring later than anytime in history (the reasons for delayed retirement can be discussed elsewhere).

If a 44 year old account manager plans to work for 20 more years, would she not be considered a future leader? If she become CFO at 54, she could lead well in that position for 10 years or more. Or what about the 58 year old marketing director that become CMO? Would he not be a leader for another 10 years or more?

We, as millennials need to change our paradigm on “future leaders.” We are not the only ones who will lead in the future, and that is OK. Instead of monopolizing leadership opportunities, let’s focus on developing others, regardless of their age.

Because we never know who will be the next person to gain more influence tomorrow than they had today.