Mary Poppins, the Sound of Music, and Your Role in Leadership

Yes, you read that title correctly. I am now convinced that Mary Poppins and The Sound of Music, both musical movies from the 1960s, can teach us about our role in leadership.

How is that possible?

I’m glad you asked. But, let me first explain how I arrived at this conclusion.

Several weeks ago, in attempt to watch something other than Baby Einstein or Mickey Mouse Clubhouse with my almost 2 year old son, I put in The Sound of Music on Blu-Ray. Since he likes music, I hoped he would like the songs.

We never would have predicted his response. He is literally captivated whenever Julie Andrews comes on the screen. The outside world ceases to exist when Do Re Mi and The Lonely Goatherd start playing. I’m not kidding. 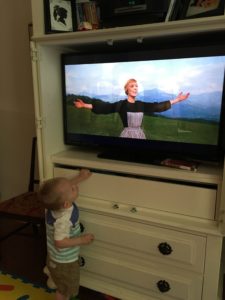 This is his response almost every time the movies come on

After several days of watching children singing in the Austrian countryside, we decided to get Mary Poppins on Blu-Ray. We assumed that our son was now a Julie Andrews fan, so Mary Poppins was the natural choice.

He fell in love with Mary Poppins just like The Sound of Music. So we have watched both movies on a seemingly endless loop for several weeks.

My wife and I started following the Storybrand Workshop, which is a narrative-based approach to marketing. If you are not familiar with it, you should listen to the podcast or visit the website.

Donald Miller, the creator of Storybrand, walks you through the basic elements of story. After learning this approach, my wife and I have put almost every movie we can think of through the framework.

The Movies are the Same

While watching Sound of Music one afternoon, I thought through the framework of story for the movie. Then I had a revelation:

Mary Poppins and The Sound of Music are the SAME MOVIE.

And they both apply to leadership.

Think about it: Each story is about a father needing supervision for his children. Julie Andrews shows up and begins caring for the children, as well as teaching them to sing. While Julie Andrews appears to be the lead character, the one who shows the biggest change in each film is the father.

And if you think about it, each father is singing by the end of movie too. But I digress.

Your Role as a Leader

“This is all interesting, Wes,” you are probably thinking. “However, I still don’t understand how this applies to me as a leader.”

As a leader, it is easy to assume that we are the focus of the story of our team. We are the ones responsible for success or failure. People look to us for decisions and approval. If we are not careful, we can fall into the trap of thinking leadership is about us.

Sure, we may appear to have a leading role due to our title. Yet that is actually not the case. Instead, we are responsible for focusing on those around us. It is those we lead who are looking for change, and we have the opportunity to use our roles to help them experience that change.

When you make this perspective shift, it reminds us that leadership is about others, not us. One is a leader because people are following. To put the focus on you in the story actually no longer makes it about you. For you to remain a leader, you need to focus on those you lead.

You may not have a bag full of tricks or a song for every occasion, and that’s OK. But what you do have is an opportunity to use your role to let others grow in the story. You have the chance to help people change for the better.