We are Experts at Target Spotting

Much has been, and is still being written, about my generation. Admittedly, we are an odd group. We grew up on the internet, but still remember having to wind up a VHS tape and blow into a Super Nintendo game cartridge. We are well-educated, but have a hard time paying off student loans and getting good jobs because we finished college when the economy crashed.

Yet we are the largest single generation in the American workforce, and soon we will be more than 50% of the total workforce. 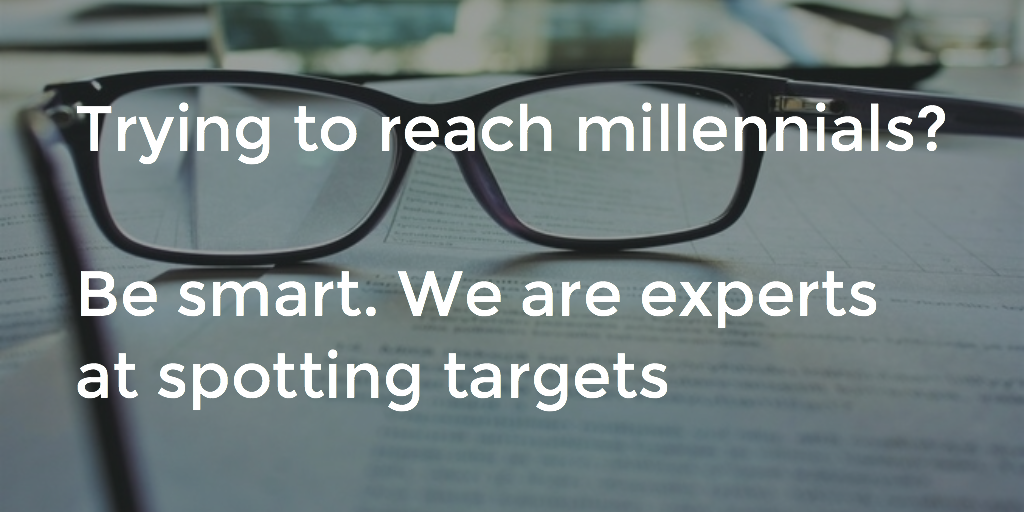 A quick Google Search will reveal an overwhelming number of articles and content focused on millennials. Several groups exist solely to help businesses understand millennials and develop their millennial employees.

I think my generation does some things poorly, but we are really good at a lot of things. Theres one thing in particular that we are excel at:

We are experts at target spotting.

What do I mean by target spotting? We know when we are being targeted based on assumptions or market stereotypes. It’s easy for us. We’ve grown up experiencing it.

Malcolm Gladwell says that you need to spend about 10,000 hours doing something before you can truly be an expert at it. The amount of time we have experienced being marketed to far surpasses that 10,000 hour mark.

Many of us had our childhood during the 90s, which was the height of the Disney animated movies. Ask any 20 or 30-something their favorite animated movie, and it’s likely Disney movie from the 90s. We had the toys, watched the movies thousands of times, and inevitably wanted to go to Disney World.

Clearly, Disney marketed heavily to kids then (as they do now). And now they’ve figured out that the 90s kids are now parents of kids. So what has happened? A spinoff of Boy Meets World. A new animated series on TV based on The Lion King (that’s my favorite movie).

Why talk about Disney? Because they are just one example of a company that has marketing to my generation for over 2 decades now. We have been targeted for a long time, so we know how to spot it.

We can tell when someone tries to target us based on stereotypes and assumptions. Our target spotting ability is nearly superhero strength, so we can spot the targets a mile away. And when we see it, we don’t like it. In fact, we really want to run the other way. Fast. Like Usain Bolt fast.

We run because it is annoying. It is annoying to be blindly lumped into a generational stereotype, and never actually asked what my generation likes. Being told what I like by someone who doesn’t personally know anyone in my generation is odd at best, and obnoxious at worst.

If you want to engage millennials for whatever you are trying to do, let me help you. Yes, you need to think about the things that will engage them. But that’s not the key.

The key, as always, is to serve your audience.

Don’t make a big deal about “targeting” or “reaching” millennials. We can smell that, and it stinks. Instead, think about who you are trying to reach. What do they like? What do they need? What is a problem they need solved?

As you answer those questions, you will gain a much clearer picture of what you need to do to best reach a millennial audience. This information will cause you to take a much different approach to reaching my generation. Instead of putting targets on us, you are instead working hard to help us.

And serving people works in every generation.